The first question a researcher asks when embarking on a new research project is: What do we know about this topic?

So, what do we, as cultural researchers in the AMASS project, know about the arts as a means to address social marginalisation?

As cultural policy researchers, our team at the University of Borås knew this question is notoriously difficult to answer. This has several reasons; for example, what do we mean by culture? Cultural can have several meanings; anthropological, aesthetical, and ontological. What do we mean by the value of culture? Value can be intrinsical, instrumental, institutional, societal, and individual (Grinell 2020). Can the impact of the arts be negative? The understanding that arts and culture are good for us and our societies is a historically specific discourse that can be traced back to Aristotle's Poetics and his catharsis concept. Much cultural policy has, in fact, been instigated by an understanding of the arts and culture as bad for us; to protect individuals and societies from the corrupting and distracting force of culture (Belfiore and Bennett 2007).

Art, as a public policy intervention, suffers from being generally considered difficult to measure and evidence. This is often linked to the limitations of the "natural science" experimental model of research and evaluation; to establish whether an independent variable (arts participation) produces a change in a dependent variable (a defined population) (Galloway 2009: 128f).

To tackle this difficult question on what we know, the University of Borås, as part of the AMASS project, conducted several studies; a systematic literature review (under peer-review), studying current research on the broad topic of the social impact of the arts, a state-of-the-arts review, studying so-called "grey" literature from the countries within the AMASS project (article coming), as well as taking part in WP2's evaluation of arts projects in European countries of the AMASS project. It has been an interesting and rewarding process that we hope can help the AMASS project and the research community at large when studying the topic of the social impact and value of the arts. 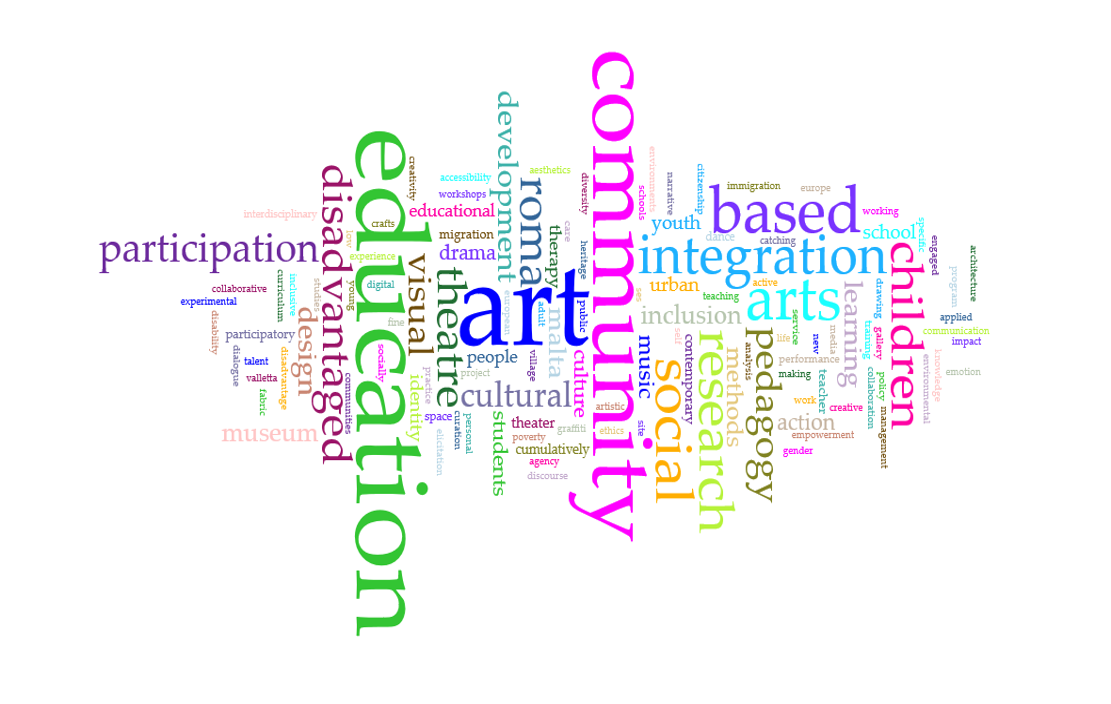 This summary is based on two interrelated studies; a more extensive review of the art’s social impact research field and a review of so-called grey literature— research reports, dissertations, government documents, and research in languages other than English— related to the same topic. Both studies were conducted in 2020.

When collecting the data, we used a model to understand populations, interventions, and outcomes in the PIO material (c.f. Arguelles 2011). Populations are those targeted by artistic interventions, projects involving art in various contexts. Outcomes are understood as the intended or perceived results of the interventions.

The grey literature review was based on 234 abstracts of research collected by the members of the AMASS consortium.

In the analysis, we found a variety of art forms in interventions; design, participatory arts, narrative arts, music, dance, theatre/drama, and visual arts. These were incorporated into interventions that targeted communities, such as in segregated areas of cities or rural places. Specific target groups were typically children and young people, migrants, minorities, elderly, women, and people with physical or cognitive handicaps.

For example, seniors are considered at risk of marginalisation in experiencing loneliness and isolation. Likewise, young people and their wellbeing are tied to structural changes and community needs. Participation in arts activity can combat these issues, strengthen ties to the community and facilitate social interaction and cohesion.

We found three ways to understand the social impact of the arts in the material; as a participatory means to agency and empowerment, identity and expression, and learning and development. However, the root causes of marginalisation are sometimes left unaddressed in research.

The review of the research field

Hitherto, there have been no attempts to delineate and explore the research field of the art’s social impact. Embarking on this endeavour, we used bibliographic methods for understanding what’s been written about this topic in the last two decades. What are the major themes, and what characterises the research front? What, according to research, is the “social impact of the arts?”

Formulating search strings based on the aims of the AMASS project—understanding and harnessing the potential of the arts and culture to address social marginalisation--we searched for literature in ten databases, which resulted in a total amount of 10,227 unique documents. We found that arts education journals are at the forefront of the field and that the number of published articles is rising since 2015. Thus, the research interest in the social impact of the arts seems to be augmenting.

We also found that the field comprises three themes—art and society, art and education, and art and wellbeing—which overlap in epistemologies but are distinguishable in their focus. Roughly, these themes present art’s social impact relating to health and wellbeing, education, and knowledge (or cognitive learning skills), and less identifiable, community and identity. The child, often in formal learning contexts, is found chiefly as the targeted population theatre/drama is the most common intervention, and knowledge/skills enhancement is the most common outcome.

In understanding the “research front,” we studied articles with similar references. We did a qualitative reading of the most-cited articles (n=42) to understand the symbolic content of the field. Again, the results showed that the most common population is children and young people in formal learning settings, and theatre/drama is one of the most common interventions. This confirms that the research front follows the theme of the co-word analysis, where these categories were also common in the overall data. The most common theme regarding outcomes can be argued to belong to an internal, academic debate, furthering conceptual and theoretical knowledge on the social impact of the arts. The prominent themes of skills enhancement and knowledge dissemination/learning mirror the co-word analysis result, where the social impact of the arts in terms of outcomes are conceptually related to learning outcomes.

When articles in the research field thematise identifiable social effects as something more comprehensive than the immediate effect of an observed, limited population (often children in a school setting), they can be listed as the following:

Thus, our analysis found evidence for the art’s social impact that can be interpreted as positive and negative. Few articles discuss the enjoyment or entertainment aspect of arts and culture.

A final observation is that although the analysis of the articles was not evaluative, we sometimes struggled to understand if and how impact had occurred and on what basis these claims were made. We claim that the outcome of developing skills or of gaining knowledge is the most researched and validated type of effect found in the data. How this effect can be claimed to be social requires a theoretical discussion on the links between education’s micro and macro impacts. 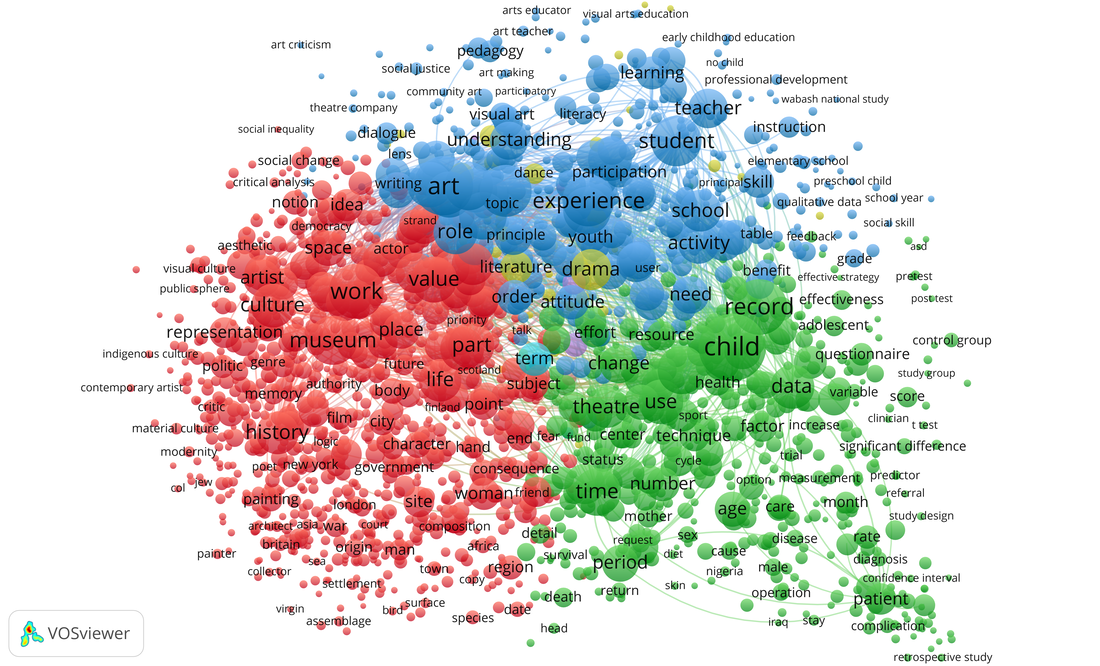 Mapping research on the social impact of the arts: what characterises the field?
Artistic Means of Social Change: Arts-Based Interventions for Addressing Marginalisation in a European Context