http://www.rakkaustalkoot.fi/
When immigrants to Finland, Iraqis Al-Fateh Ali Mousa and Saba Majid, received a asylum decision and were invited to live in Rovaniemiin 2018, they wanted to gift the community and Finland something of their own culture in return as a token of appreciation. They chose to build a scaled model of the Ishtar Gate, which symbolises a show of love for their new home country Finland. The Neighbourhood and Love Talks (“Rakkaustalkoot”) project began to build around this gesture. The project approached the city as a common home for all its inhabitants when Pieta Koskenniemi, local animator, live art maker and art educator started to curate and plan the project.
Neighbourhood and Love Talks arose from the need to practice meeting another person -- a neighbour, an unknown person on the street, a member of our family -- with open minds and without preconceived notions. Pieta Koskenniemi and her team initially planned to include many “blind dates” into the project activities, for example inviting unknown members from Rovaniemi neighbourhoods to garden, home and front yard parties. However, the Corona summer of 2020 came to change such plans. Instead, the project experienced a unique late summer when community arts meetings were hosted in public spaces around Rovaniemi, with the emergency situation of the pandemic still prevailing.
Before the Corona pandemic in winter 2020, the project invited special croups to join the exploration of the theme Neighbourhood and Love Talks. The basis of the various workshops that were organised included the fields of art, culture, health and social care. The operational environment encompassed art workshops carried out in Lapin Muistyhdistys Ry[Memory association of Lapland], a daytime activity centre for elderly. Art education students organized four art workshops with 12 elderly women. Rovaniemi Youth Service was also invited to join. All the art works were exhibited later in the workshops space at the Revontuli shopping centre as part of the main activity week in September 2020.
The Love Talks activities included a sticker-making workshop, introducing the worlds of sticker culture by making handmade stickers on the themes of love and acceptance. Another activity was a mural painting workshop with indoors designing and outdoors painting days. Musical and performing arts initiatives included Finnish sledge songs and their Roman musical versions, and street dancing workshops titled One Love Jamboree.
Our ambition was to attract equal amounts of participants from the general public, but also immigrants, elderly people, young adults and people from different backgrounds. The Corona pandemic presented many challenges, but shifting from closed workshops to open access art spaces resulted in the participation of many immigrants and community members.

Forest talks to us
Maria Huhmarniemi

The group exhibition “Forest talks to us” offers perspectives on forest disputes as well as on the concepts of conversation and co-creation. The themes of forest disputes, stemmed from a wicked problem around climate crises, lack of biodiversity and forest industry. Locals, nature activists, forest owners and representatives of national forest institutions have different views of good ways of using forest. For example, the forest industry causes eco-anxiety.


The need to increase dialogue and understanding of the cultural backgrounds of environmental conflicts is evident in Lapland in Finland. The artists of this group exhibition applied arts in the mediation of environmental conflicts by listening to and representing the various voices of stakeholders, including non-human nature and local cultures, in Äkäslompolo. Ecoculture and forest culture are some key concepts in the exhibition. 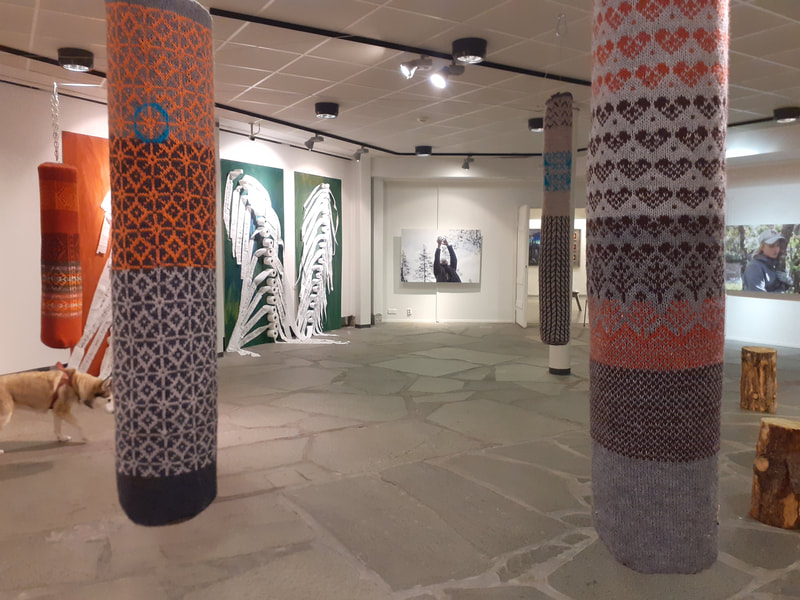 Forest talks to us exhibition in the Gallery Kellokas. Photos: Maria Huhmarniemi

Poster of the exhibition.

Most Finns have an emotional relation to forest and strong opinions of the current state of the forest industry. Nature conservation organizations and some decision-makers call for the protection of biodiversity and carbon sinks. Industrial forest maintenance in the current form is not accepted by a large number of the Finns. The ongoing battle positions most of us to the audience. We follow the battle like a boxing match on television.
Recent research indicates that Finns gain more well-being from mature forests than younger ones. Older forests have a sense of naturalness, aged trees and rich diversity. High pressure for the efficient forest industry and economic benefits violate our forest culture and discourage our renewal in forests.

Amir Abdi shows two artworks in the exhibition Forest talks to us: “Synastry: Earth and Human” and “Bio-Art Yantra”. Both of the works study human-nature relation and co-creation. In the video Chilean Hugo Peña Lagos dancers in a forest. The dance is edited into the soundscape by musician MycoLyco from electrical resistance measured by passing a small current through the mushrooms. The changes in resistance are then converted into control signals which determine the rhythm, pitch, timbre and effects parameters of the modular synthesizer. The Bio-Art Yantra consists of ropes and oyster mushroom. The yantra is co-created by the artist and oyster fungus grown on ropes in biolab with the help of mycologist Katarina Česnikin. The phrase in the title, on the ropes, refers to being at the edge in a conflict and to the vulnerable position when pinned against the ropes enclosing the boxing ring.

Amir Abdi, still-image from the video “Synastry: Earth and Human”, 2021.